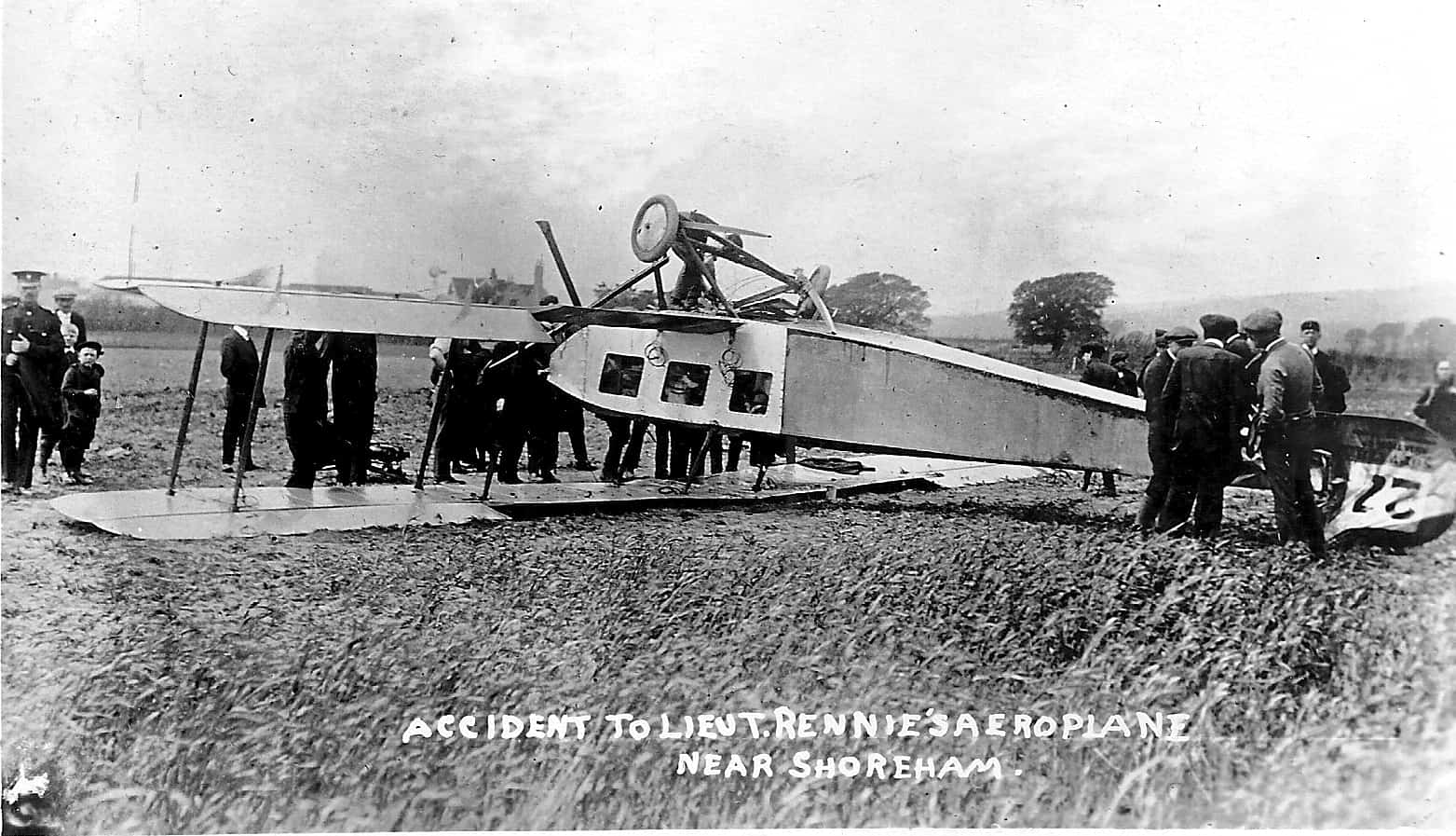 This post is a copy of an article which was originally published in the Spring 2019 issue of the Shoreham Airport Society Magazine (Volume 26 issue 1).

Members of the society receive a copy of the magazine every quarter.  In addition, there are monthly talks/meetings held at the airport throughout the year, plus an annual coach outing to a major aviation museum or event.
The current subscription rate is just £12 per annum.

A Flying Mishap at Shoreham.

The photograph below, which shows an upside-down aeroplane in a field, has been taken directly from a postcard that was issued at the time of the incident.
But what do we know about the event?

The aeroplane is a Sopwith D1 three-seater general purpose biplane.  From the number 27 on the tail, we can tell that this example was operated by the RNAS.
With a wingspan of 40 feet, and powered by a 7-cylinder Gnome Lambda rotary engine, this type of aeroplane first flew on 7th February 1913.  On 16th June 1914 one of these aeroplanes achieved a new British altitude record of 12,900 feet whilst being flown by Sopwith’s chief test pilot Mr Harry Hawker.
This type of aeroplane carried two observers sitting side by side in the front, with the pilot behind.  Three celluloid transparent windows were fitted in each side of the fuselage to give the observers a downward view.

The pilot on this occasion was Thomas Albert Rainey, who was a Flight Sub-Lieutenant with No 3 squadron RNAS, based at the Isle of Grain.
Mr Rainey had learned to fly at Eastbourne, and gained his flying certificate on 2nd May 1913 flying a Bristol Boxkite operated by the Eastbourne Aviation Company.

On 4th May 1914, Thomas Rainey, with a mechanic on board as a passenger, took off from Shoreham aerodrome, only to land in a field near the Sussex Pad Inn shortly afterwards due to engine trouble.  The problem proved to be a broken oil pipe which the mechanic promptly fixed.
The two men then took off again, but when the aeroplane was just a few feet off the ground the engine failed again, with the result that this time the plane came down and turned over.  Fortunately both men escaped injury, although the pilot, Mr Rainey, was severely shaken