Following helpful guidance from the Special Collections Librarian Kathryn McKee at Cambridge it transpired there were even more Shoreham photos in the collection that had not been displayed on line. Arrangements were made to visit the Library and record the unseen photos. During the work to copy the newly discovered images one major point of interest that became apparent is that Butler was an acquaintance of the Gogins, artists of the time who had their studio on the riverside in the old ship building yard but it is the day to day folk and particularly the children of the town whose characters come shining through in these images.

The date of most of these photos has been faithfully recorded in Samuel’s albums and all of Shoreham’s appear to have been taken on the 31stMarch 1891. It has been possible to identify the location of most of them from the buildings in the background. This in turn suggests Samuel and his friends took a walk from one end of town to the other taking photos as they went (see footnote). Perhaps the images in this article will help recreate the atmosphere of that day. Additional photos from other collections have been included to help illustrate the locations identified and to avoid confusion all Butler Collection images are shown in their original sepia colour.

The Samuel Butler Collection and catalogue is held by the St. John’s College Library, Cambridge https://www.joh.cam.ac.uk/library. If you would like to see more of Butler’s fascinating collection on line do take time to visit the  History Point Website

Footnote:- A chance discovery reveals that the Gogins did not in fact live in the studio and only used it to work in. The 1891 census shows they actually resided at ‘Laguna,’ a house that still stands a stone’s throw from the start of their walk that day and neatly provides a reason for the route they took from house to studio! 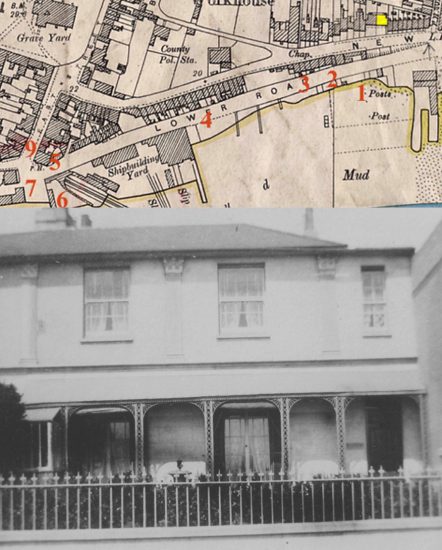 ‘Laguna’ is shown in yellow on the map. It is the eastern half of an up-market, semi-detached property built in the 1830’s by the brothers George and Robert Butler but as far as is known they were not related to Samuel Butler.