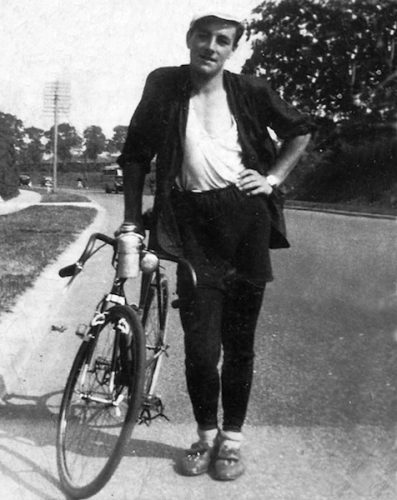 Shoreham has something of a history of racing cyclists. The first ones we know of were A.F.W. Eade, the 20 year-old son of the Eade’s Stores owner; Fred Read and George Hedgecock, a 26 year old bootmaker, who came first, second and third respectively in a 10 miles race organized by the Shoreham YMCA Cycling Club on the 10th July 1888.

It was a ten-mile course to Bramber railway station and back and the winner completed it in 43 minutes and 35 seconds – something of a feat when you consider their heavy and cumbersome looking machines. Eade was riding a ‘Kangaroo’ penny-farthing type – the very latest model of the time.

During the early 1900’s Reg Eley from Haslemere was already a champion amateur racing cyclist in the south-east before he moved to Shoreham following his marriage to Myrtle Winton. Reg then joined the Worthing Excelsior Cycling Club and later became an agent for, amongst others, the Singer Motorcycle Company whose machines he sold from his High Street garage.

There were many others from the town who took up competitive cycling including the Nye and Ulph families from Old Shoreham. Grace Farley (b. 1899) whose parents ran the butcher’s shop at 40-42 High Street, was perhaps one of the earliest women riders from Shoreham during the 1920’s – if that is Reg Eley officiating the photo must be before 1926 when he died. We also know that Albert Ernest Patching of Gordon Road was another early racing cyclist in Shoreham and he appears in photos with Reg Eley (3) – Albert later became the secretary of the Shoreham District Cycling and Athletic Club during the 1920’s – 1940’s. 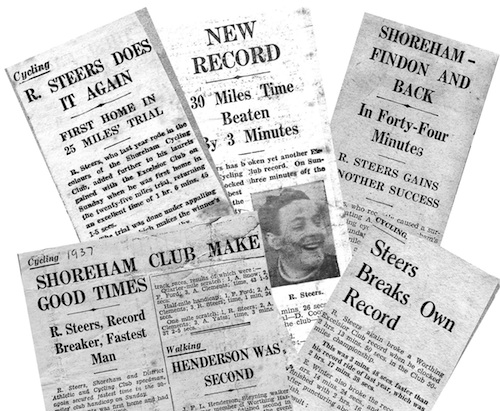 During the second half of the 1930’s another Shoreham cyclist was making his mark. Richard (Dick) Steers was the son of a retired Greenwich policeman who had moved to Greenways Crescent in Shoreham. Dick joined the Shoreham Cycling & Athletic Club in 1937 when fellow club member A.F. Yates, the leading racing cyclist in the county, was the man to beat. In only his second race for the club, a 50-mile handicap, seventeen-year-old Dick registered an actual time only 1 minute 23 seconds behind Yates but with the handicap applied realized a time of 2 hours 17 minutes and 24.4 seconds which made him the winner.

There followed a number of scratch (1) and handicap races that year where both shared the spoils but before long Dick edged ahead to an extent where he almost swept the board the following year. By 1937 he was one of the leading racing cyclists in the county during which one particular success of his was recording the fastest time (1 hour 7 minutes and 42 seconds) at the Portsmouth North End Cycling Club’s 25 mile road time trial involving 85 competitors from Hampshire, Sussex and beyond.

Shortly after all three were again competing for the Shoreham club in Worthing Excelsior Club’s 30 mile handicap. Dick, again a scratch rider, achieved first spot with a time of 1h.21m.44.4s). Tragically both Jim and Fred were to become war casualties. Jim, a Steyning lad was killed in the North African desert in 1943 and Fred who lived at Dacre Gardens near the cement works died in France when his tank was hit two days after D-Day.

Racing with the Shoreham club would have continued for Dick but the club secretary Albert Patching wanted to make changes that did not go down well with some members. Consequently in 1938 Dick, Fred Ford and a few of his pals found themselves transferring their membership to the nearby Worthing Excelsior Club whose aims and operations were more suited to them.

Success continued at Worthing and in his first season with them Dick set up a new record in the club’s 25 miles with a time of 1hr. 6mins. 40.8 secs. He also beat the club record for the 30 mile race by 3 minutes, came first in the 25 miles trial and was awarded the Sussex All-Rounder Cup – recognition of his standing in the county. His efforts in the five minutes pursuit race at the Preston Park track were particularly noticed by a sports reporter who commented:- “ The first young fellow that caught my eye was Dick Steers of the Worthing Club. ….. has been riding a couple of years and loves it…… officials there think he will carve out his own path in this cycle business ….. I saw him speed away with the Five Minutes Pursuit Race covering a distance of five laps and 611 yards ……. Steers is now the holder of the Diamond Jubilee Pursuit Brassard.” (2)

This was the race against L. Cattell of Eastbourne that Dick won by 1.40 seconds. The two again competed against each other later that day in the 10 minutes roadmen’s pursuit which Dick also won which prompted one newspaper to credit him to be “the best rider in Sussex at this type of race.”

Racing included team and inter-club matches and in one competition involving teams from Sussex and London he rode for Worthing Excelsior when it took the Chichester 50 team prize. In 1939 he broke his own club record of the previous year when he clocked 2hrs. 13mins. 50secs in the 50 miles championship and did it again in the 25 miles trial achieving 1hr. 4mins. 33secs, beating his earlier record by almost two minutes.

What kind of route did these races follow? One regular 25 mile route taken by the Shoreham club involved a start near the Red Lion through Steyning, Partridge Green then Cowfold and return. Excelsior’s usual 25 mile course was from Findon to Horsham and back – all in the days when there was little motorized traffic and only ‘A’ and minor roads. One more detailed example was the Sussex Association 25 mile time trial that year that went from the King’s Head at Albourne westward to Cowfold, West Grinstead Station, Coolham then returned through Cowfold and Chestham Park north of Henfield back to Albourne.

Things did not always go to form however. Road traffic in those days was light compared to what it is now but accidents between cyclists still happened and in 1939 two crashes in the Sussex Association’s 100 miles event destroyed his chance of retaining the Sussex All-Rounder Cup. Another crash caused him to lose first place in the Sussex Association’s 25 miles championship, but even then was only 61 seconds behind the winner

During Dick’s time with Excelsior another rider was making her mark. Doris Painter, a Durrington girl, took the Alderman Brackley Cup during Worthing Excelsior Ladies’ 15 miles race that she won in 46 minutes. 52 secs. This was followed with a first at 16 mins. 10secs in the 5 miles event then another first in the club’s 10 miles when she won in 30 mins. 38 secs. 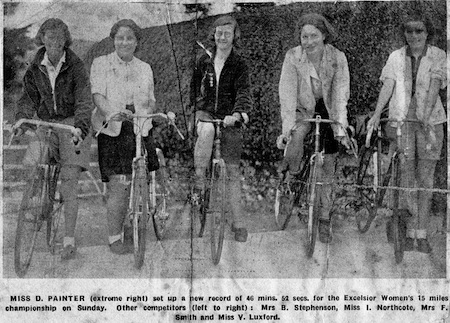 Doris and Dick struck up a romantic friendship and the future looked really bright for both from a personal and cycling perspective. But the threat of war finally became a reality that year and prematurely terminated what would have been an excellent season for Excelsior. Nevertheless, notable amongst their successes were:-

Dick was called up and enlisted with the Royal Engineers and although the war had interrupted their cycling, it did not prevent them both from marrying at Durrington in 1941. 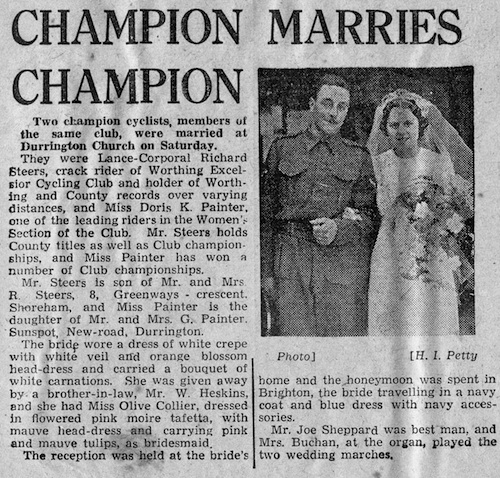 All hopes of a return to racing after the war though were cruelly dashed when Dick was involved in an horrific accident. An army lorry he and his mates were boarding started off prematurely. Dick was dislodged, fell but was snagged in the tailgate and dragged for some way before the driver responded to the shouts of the passengers and halted. In those days sufficient surgery was not readily available and there followed a period of 18 months in the army hospital at Leatherhead where his broken thighbone and pelvis were fused together – cycling was no longer an option.

Not being able to compete in competitive cycling was a huge blow but both he and his wife still managed to live a full life, During the 1960’s they moved to a house in Church Street which unknown to them at the time was the old house that Reg Eley, the early 1900’s cycle champion, once lived in with the Wintons.

Dick is now a particularly lively minded 93 year old with a host of fascinating reminiscences of his full life – he still recalls his childhood in Greenwich with colourful memories for example of horse-drawn buses with drivers seated out in the open and canvas aprons wrapped round them when it rained. As a young man he witnessed the German Zeppelin airship on a commercial flight over London and a forest of barrage balloons in the sky above the capital in WW2.

He followed a career as bridge engineer for British Rail in London during which he designed a working model used to measure bridge weights and stresses that was exhibited for a season at the London Science Museum (it still tickles him that as he and three colleagues were carrying the man-sized model bridge in a box through London to the museum passers by would make way and respectfully doff their hats!) – he was even involved in the work to renovate and strengthen Old Shoreham’s wooden Toll Bridge in the 1940’s. In his spare time he has displayed a talent in his paintings – in retirement he maintains a healthy interest in what goes on in the world and has a passion for history.

(1) ‘Scratch’ means the rider does not have any advantage or benefit from handicaps. The rider who races the fastest time in a timed trial.

(2) A trophy for which the current holder must be prepared to accept challenges during race meetings for the right to hold the brassard and must have been fascinating to  watch. The first round starts with all challengers being spaced evenly apart around the track and whenever a rider is overtaken they must drop out until only two are left – these two then compete in a final. 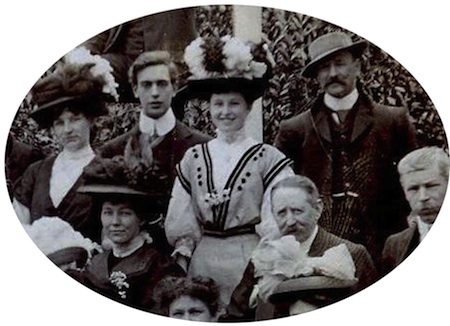 (3) Detail from a 1908 wedding photo (image no. W5l in the Winton Collection on this website) – from left to right Reg Eley is the young man with the high shirt collar, and next to him Myrtle Winton then Albert Patching. Fanny Patching is immediately below Reg Eley and William Edward Winton is beside her.

The complete collection of the newspaper cuttings:- 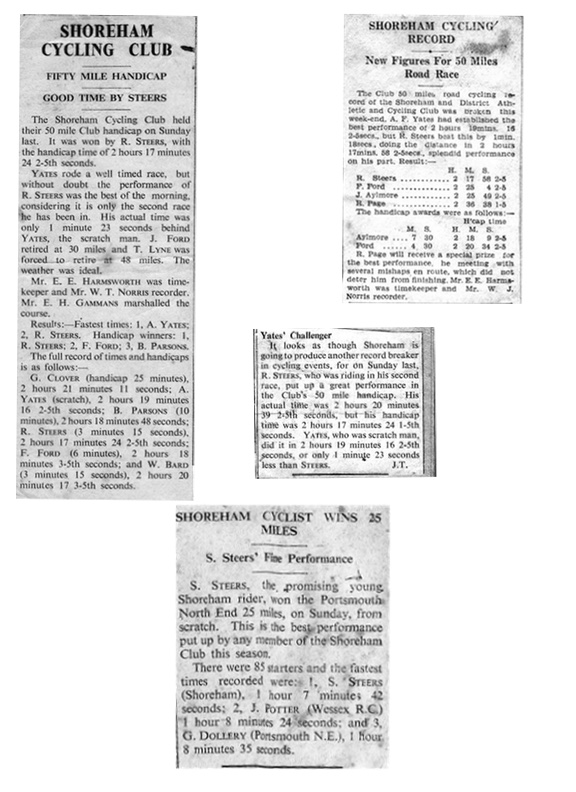 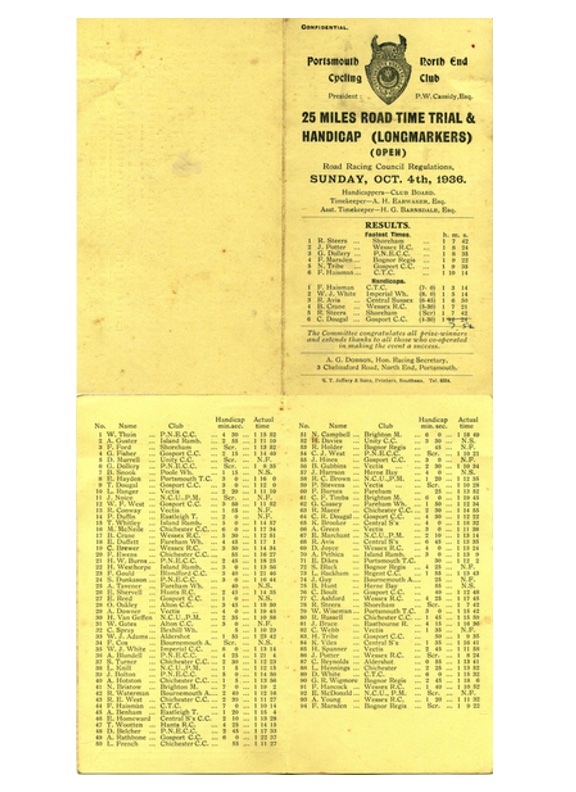 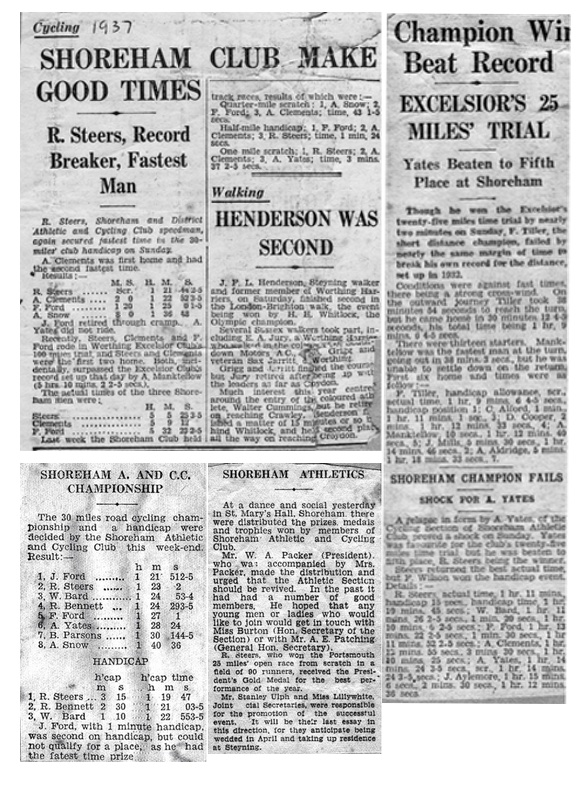 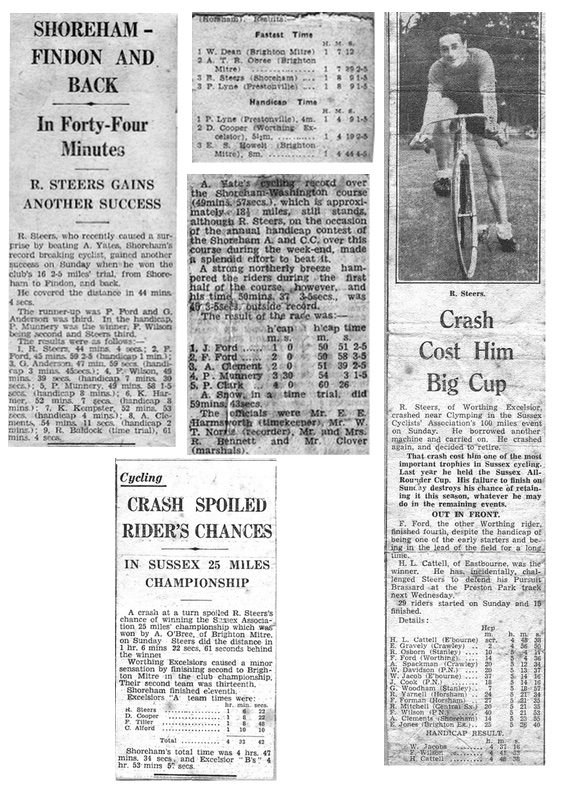 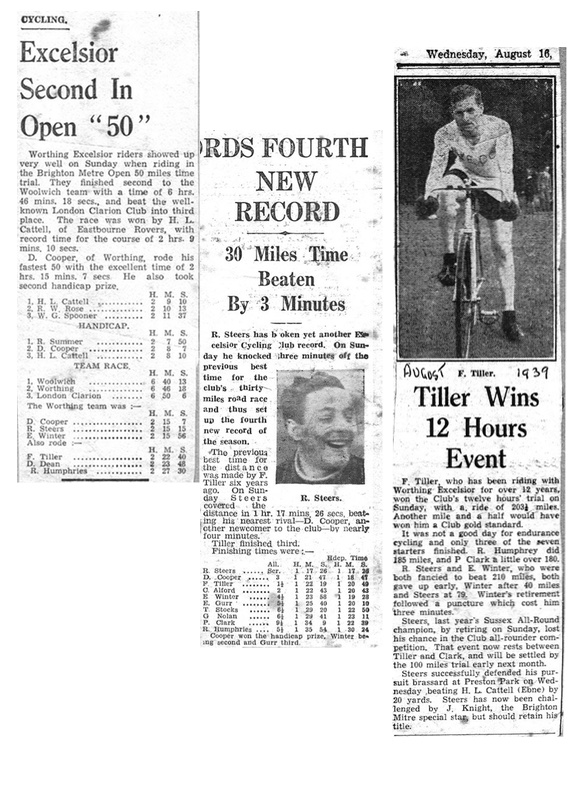 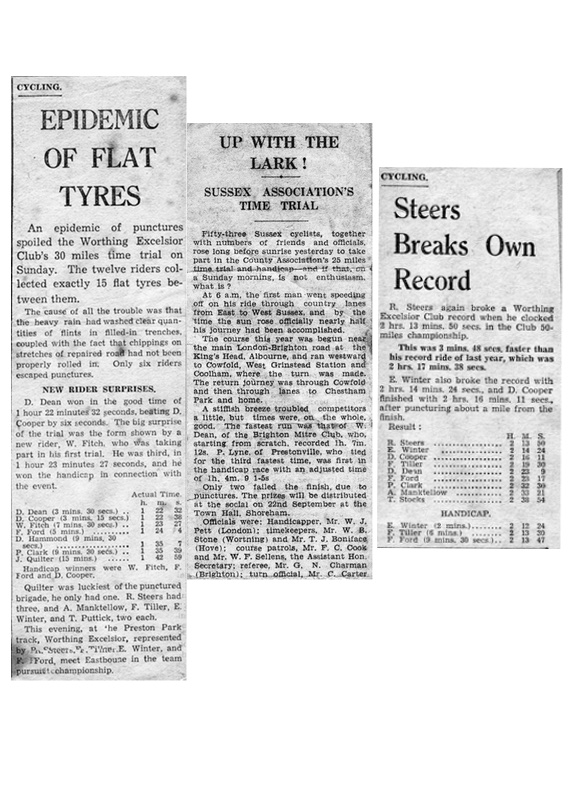 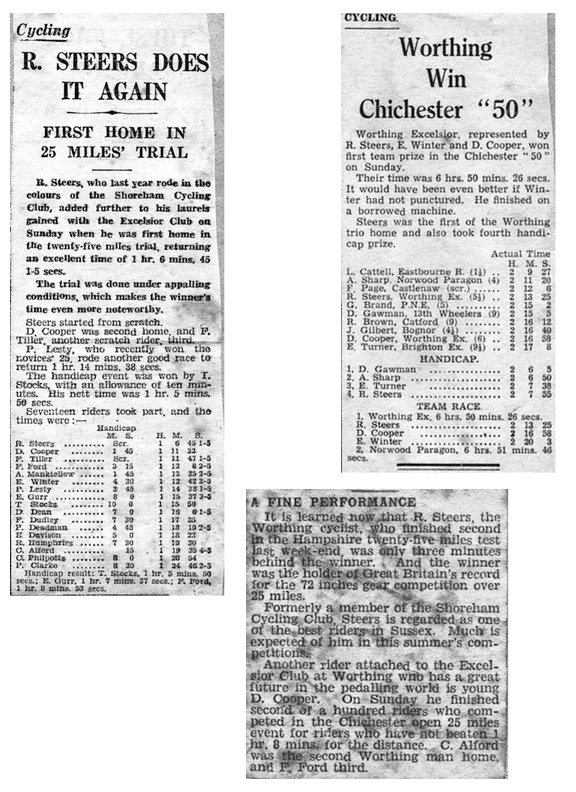 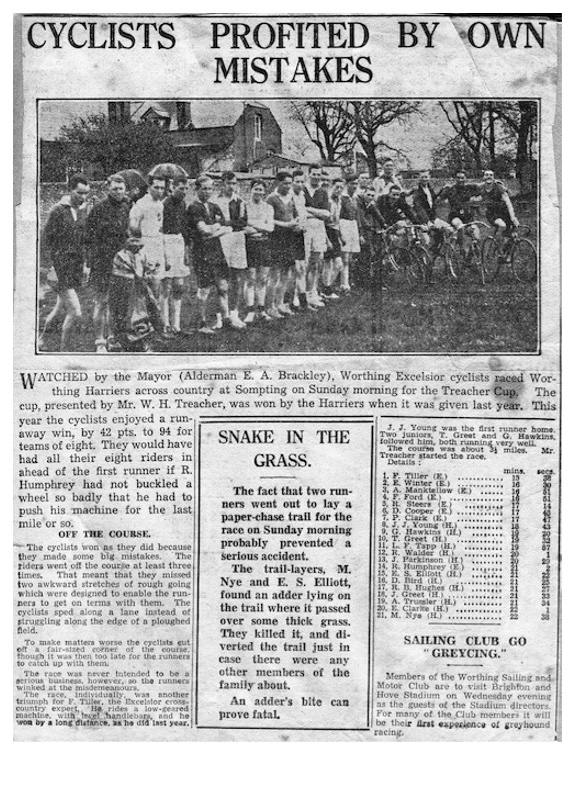 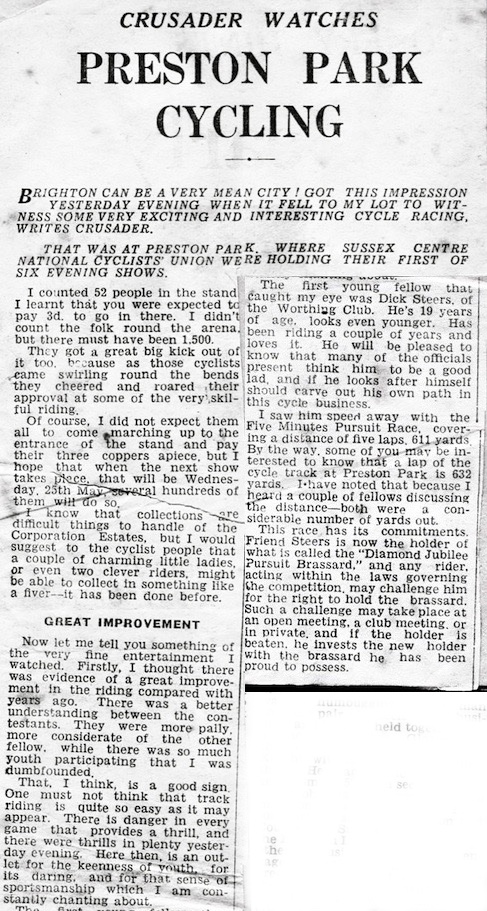 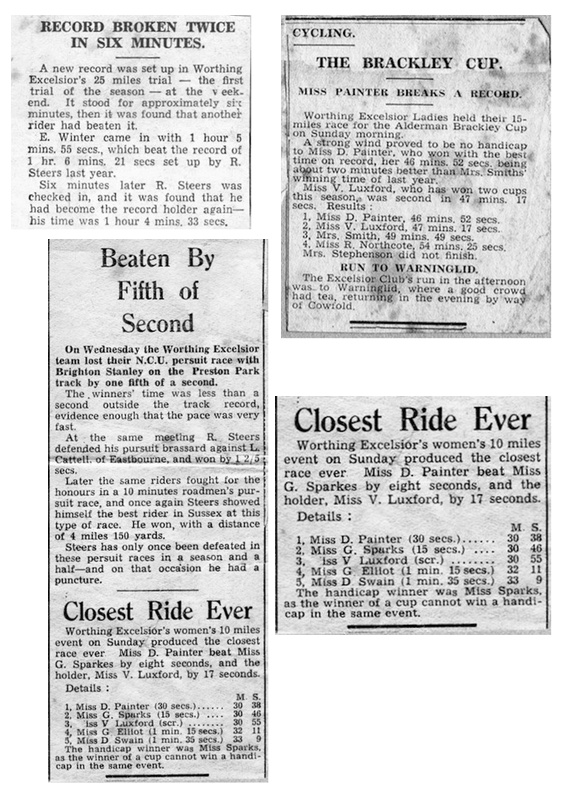 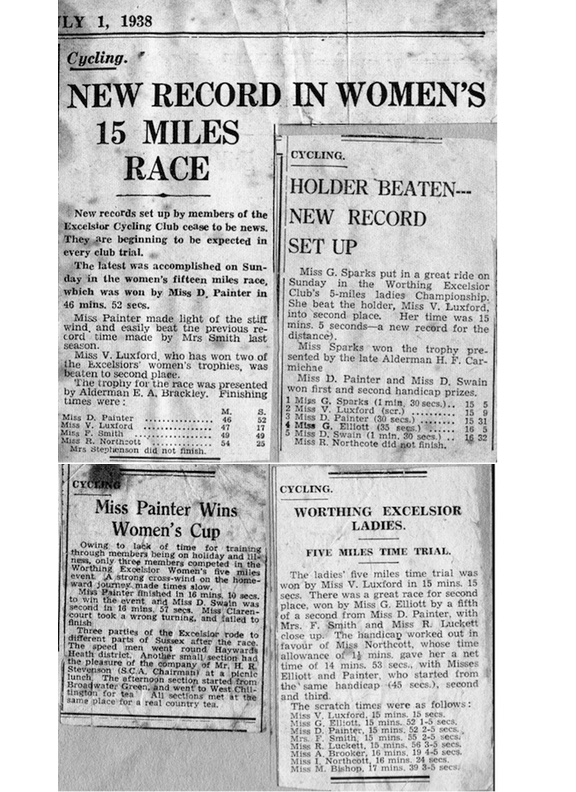 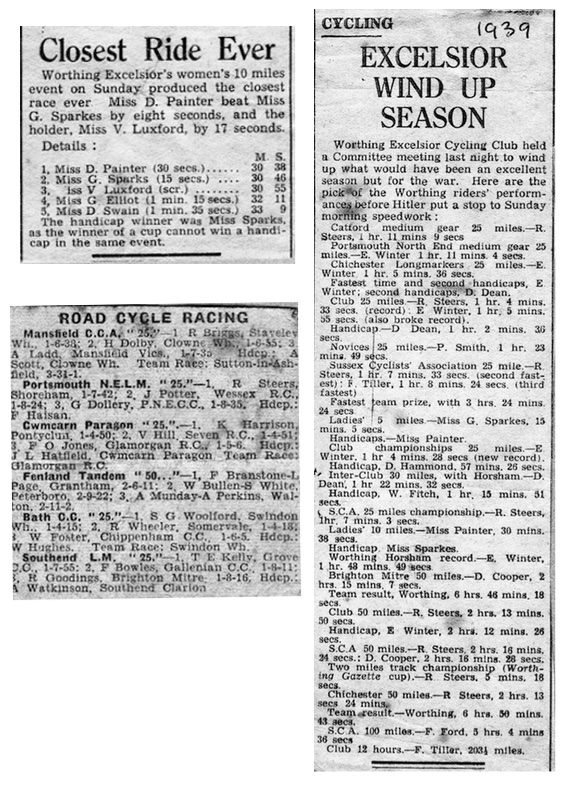