Each entry shows the name of the ships they sailed in, the details for which (maker, year built and where, type, size, owners, other captains, routes etc.,) can be ascertained from the listings of ‘Ships Built or Registered in Shoreham’ and a number of the individuals identified in the 1851 and 1861 census returns on this website (see links below). Captains at this time did not always remain with the same vessel and often moved from ship to ship for different voyages, a signatory on this list could well have taken over from another on the same list.

Many of these master mariners can be seen to have enjoyed long and successful trading careers on vessels such as the ‘George,’ the first to use the newly built lock at Southwick, but some were less fortunate. Surrey Street residents John Cobby, captain of the May & Thwaites built ship ‘Alice,’ (entry No.11) and his wife Matilda perished in 1859 when their vessel was wrecked in the Turkish Bosphorus. Captain William Horrocks of Church Street (entry No.23) was more fortunate and was rescued after his ship the ‘Echo’ was run down by another vessel in 1862 off Flamborough Head.

The handwriting of some of the signatures and ship names are difficult to read. The complete numbered list has therefore been transcribed and appears after the original document (below) together with any other information of interest including some of the other known ships that each signatory had commanded. Any subsequent ship losses noted were under the command of a different captain unless otherwise stated. 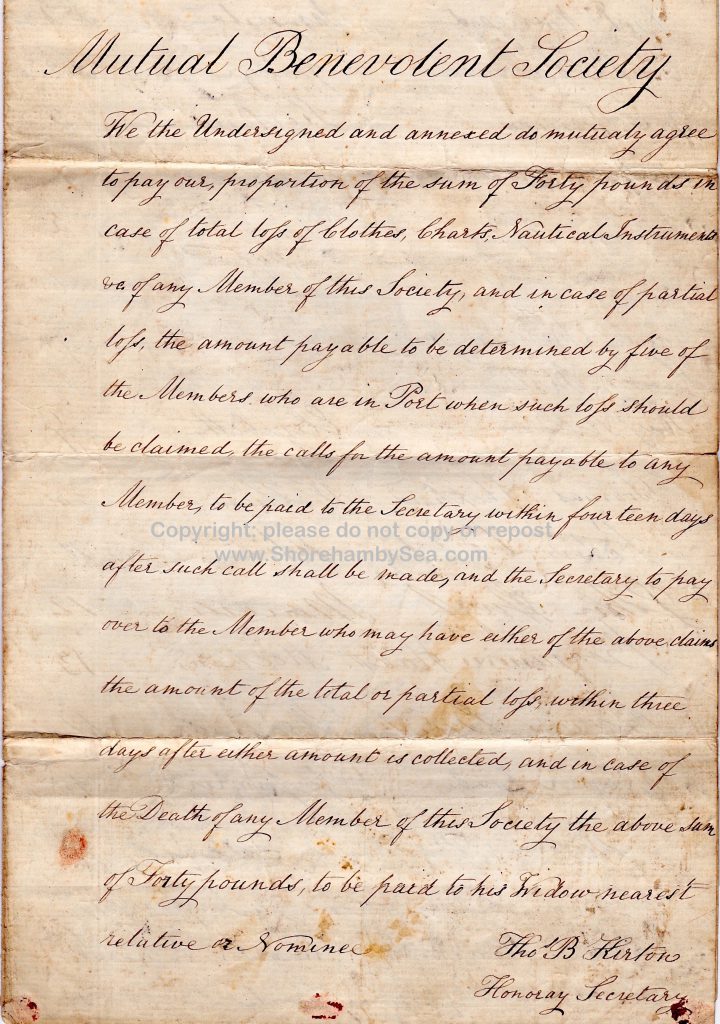 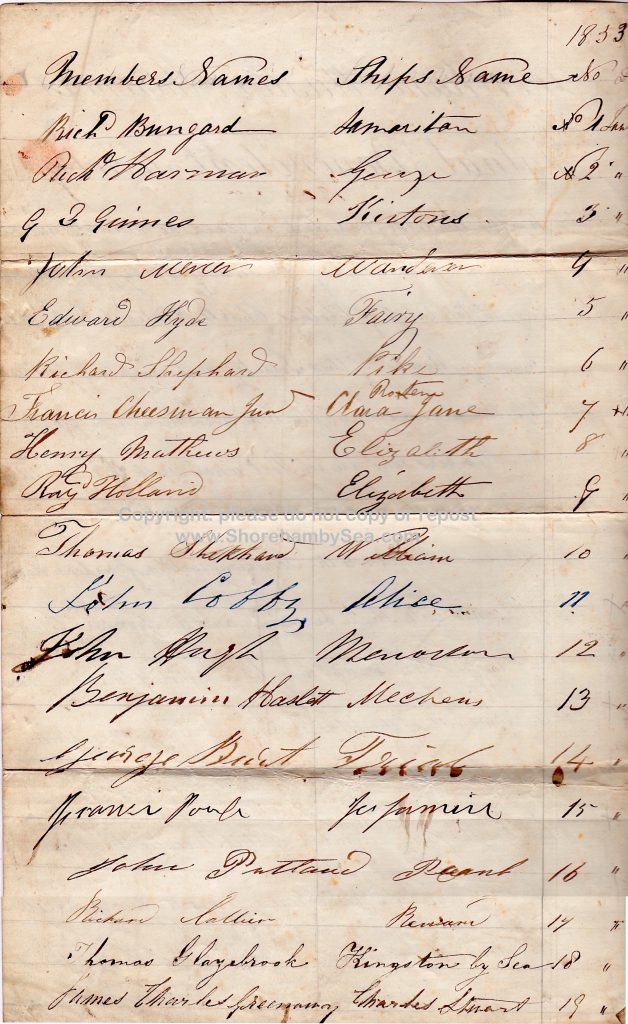 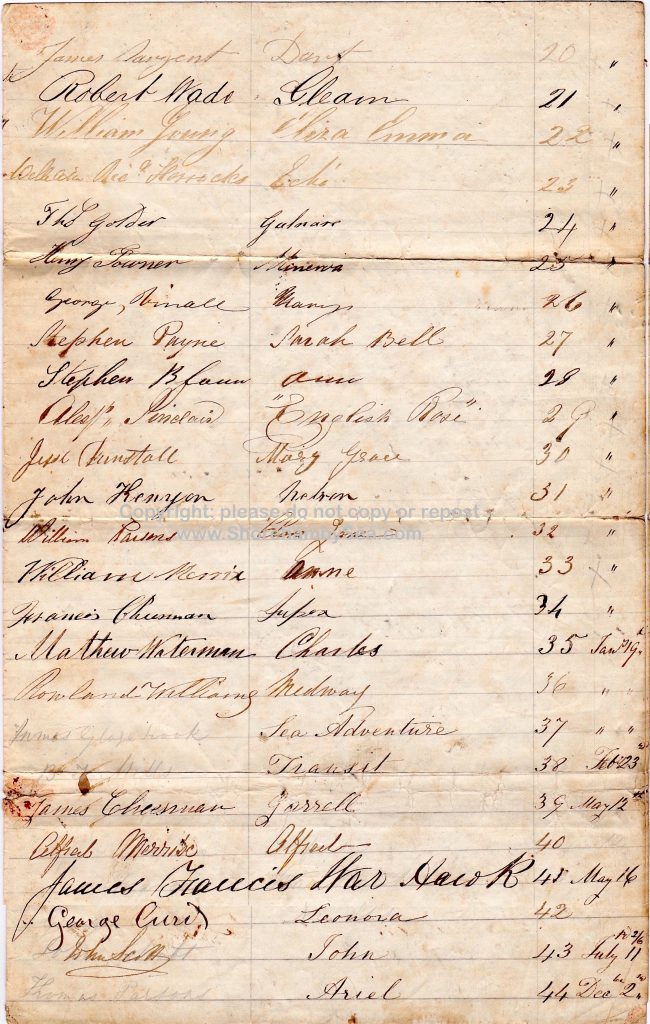 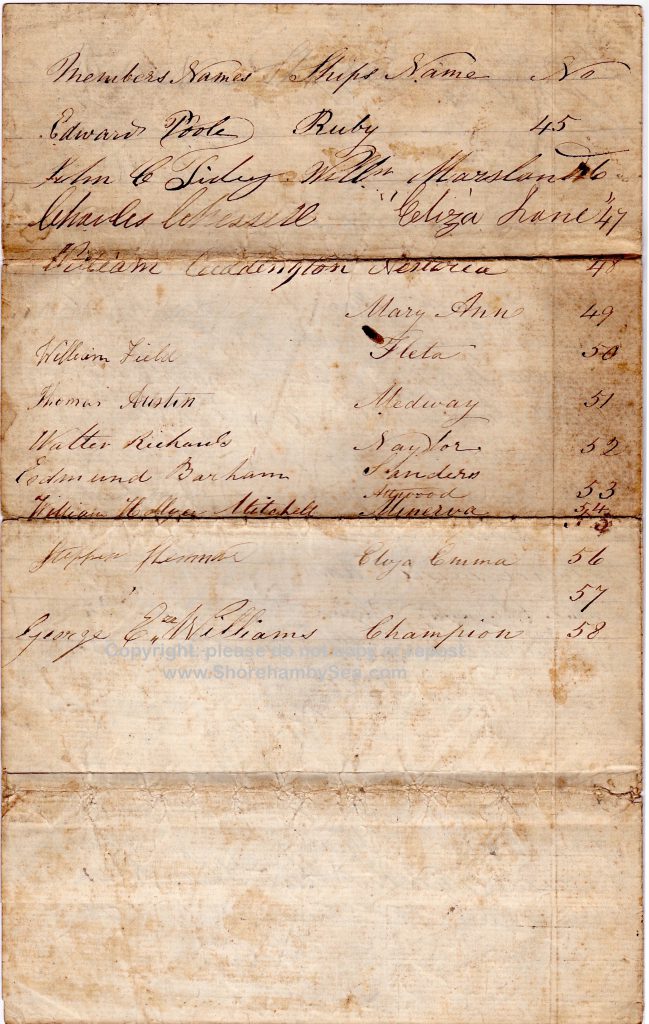 1. Richard Bungard – Samaritan – lived in New Road and also known to have commanded the Hark-Away. The Samaritan was wrecked at Pembury, off Camarthen in 1863

2. Richard Harman – George – built by May & Thwaites at Kingston in 1839 this vessel was the first to pass through the newly built locks at Southwick. It had a long trading life as a coaster but was finally wrecked near Hornsea in 1882.

3. G. Grimes – Kirtons – although not a locally built ship it was owned by, and named after, C.S. Kirton of Hove who may have had a family connection with Thomas Brown Kirton the Honorary Secretary of the Benevolent Society.

8. Henry Mathews – Elizabeth – to differentiate this and the following ‘Elizabeth’ this ship was built by May & Thwaites, Kingston in 1839

11. John Cobby – Alice – also commanded the Pike, Avenger and Victoria. In 1859 Cobby and his wife Matilda died together when the Alice was wrecked in the Bosphorus. The Alice was built by May & Thwaites at Kingston.

12. John Hugh – Mendora – also commanded Blue Bell and Capella. This vessel was owned by Edward Lucas then R.H.Penney, both of Southwick.

23. William Richard Horrocks – Echo – Horrocks rescued after the Echo was run down and sunk by another vessel at Flamborough Head in 1862

28. Stephen Blann – Ann – possibly one of the Gorringe owned ships that he used from the wharf at Kingston

31. John Kenyon – Nelson – a schooner built in 1842 that foundered of Flamborough Head in the 1870’s when the captain and crew were lost.

33. William Merrix – Anne – Merrix was the captain when this vessel was wrecked in a storm off the Seaford Roads in 1860

34. Francis Cheesman – Sussex – built by May & Thwaites in 1840. Cheesman was the first master and part-owner. He also commanded Hark-Away

35. Mathew Waterman – Charles – built by May & Thwaites of Kingston in 1846. Waterman also commanded the William Marsden

37. James Glazebrook – Sea Adventure built by May & Thwaites, Kingston in 1848

38. B. T. Mills – Transit – probably the Transit that was wrecked in an 1860 storm on the beach east of the Chain Pier

40. Alfred Merrix – Alfred – Alfred Merrix was the first master of this vessel, built by May & Thwaites in 1847 and was probably named after him as joint owner – the ship is noted as ‘lost’ in 1864. Alfred also commanded the George and the Charles

41. James Francis – War Hawk – built by James Britton Balley at Shoreham and launched at 12 noon on Tuesday the 10th May 1853 – the entry in the listings is dated the 16th May and must be very near the time of the vessel’s maiden voyage. Built to a design ahead of its time the ship eventually went down after bad weather off the coast of Estonia in 1863. The full story of the War Hawk can be seen in the article of the same name on this website. James Francis also commanded Wild Dayrell and Hastings

42. George Curd – Leonora –This vessel was built in 1853 by James Britton Balley of Shoreham and George Curd was the first master so, like the War Hawk, this may record the maiden voyage as well.

44. Thomas Parsons – Ariel –built by May & Thwaites of Kingston in 1852 and Parsons was the first master. The Ariel was lost on the Goodwin Sands in 1872

46. John C. Tidey – William Marsland – built at Shoreham in 1853 but builder unknown. Perhaps a maiden voyage. By 1860 the vessel went on to work the Swansea/South America route. Tidey also commanded the Fanny

49. Richard Ratcliff – Mary Ann – Built by May & Thwaites in 1848. Ratcliff was the owner and first captain. The vessel ran ashore on the west side of the harbour during a storm in 1860

53. Edmund Barham – Sanders (beneath it is written ‘Atwood’) – 195 ton schooner built by James Britton Balley for the coastal trade in 1841

54. William H. Mitchell – Minerva – also commanded the John Sharp and Merchant. The brig Minerva had a very long life having been built at Lynn (King’s Lynn) in 1802. It was registered at Shoreham for a while from 1850 whilst under the ownership of Richard Ratcliff (see 49) who also sailed her and used on the Hartlepool coastal trade.

58. George Williams – Champion – also commanded the Thomas English and Britisher. The Champion was a brand new 297 ton brig built in 1853 by James Britton Balley for Thomas English of Shoreham and others and used on the coastal trade. It was lost near Whitby in 1878

Sources (including links to related items):-