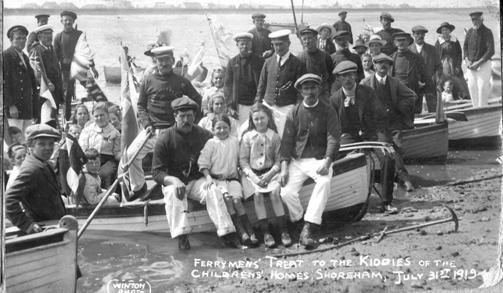 It was the ferrymen who came up with the idea to give the St. Wilfrid’s children a water-borne outing by utilising their own boats and manpower for a trip on the river.

The concept was gradually developed and with a generous donation from Major Sexton, benefactor of many charitable concerns in Shoreham, the idea grew to become quite involved with a boat journey to Bramber and back, organised games at the castle grounds, a picnic, a visit to the Bramber museum then a return down river for a two-hour show of films at the Star Cinema in Church Street – an excursion that would surely be enjoyed by many today, adults and children alike.

Exactly when the first outing was organised is not clear but it does seem to have become a regular annual event and we do know of two that took place in the summers of 1919 and 1920.

The Winton family owned the Star cinema and provided the film show but it was William C.A. Winton, photographer and postcard manufacturer (his father organised Shoreham’s famous regattas) who left us a copy of the outing itinerary and whose photographic collection provides a visual record of the event.

Popularly known as the “Ferrymens’ Treat” the children from the home marched from St. Wilfreds to Dolphin Hard where the ferrymen and their boats decorated with flags were waiting:-

Moving on upriver selected images from William Winton’s photographic record provides a taste of some of the views those children would have seen during the outings:-

With the ferrymen once more operating in relays the children embarked on the return journey down river to Shoreham. Arriving back at Dolphin Hard and after a short walk to Church Street they entered the Star Cinema where the Winton family had prepared a film show that most likely included more treats by way of sweets and drinks.

Two hours later with the film show over at the end of a long and full day the children were walked back to St. Wilfrid’s in Ham Road. They must have been tired but hopefully were brighter in spirit knowing that, despite the hard times they had so far endured in their young  lives, there were still things in life to look forward to and people that cared.

Most of the photographs in this article were taken by William C.A. Winton himself and have been selected from the Winton and Doris Steers Collections on the Shorehambysea.com website.

2 Replies to “The Shoreham Ferrymen’s Treat”