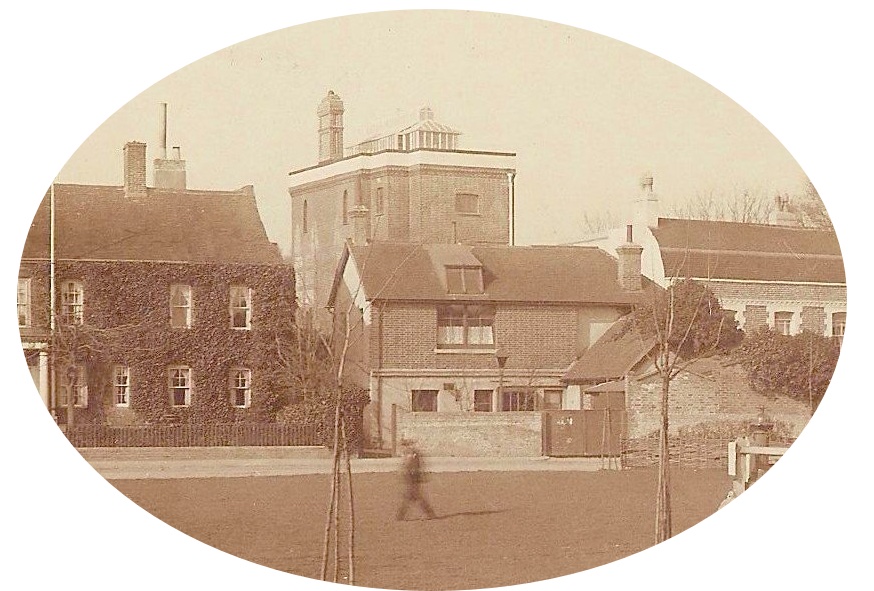 Nowadays Southwick’s Indian Temple remains largely forgotten but in its time was an imposing building that, being visible from many parts of the town, was a familiar sight to most Southwick residents.

It’s creation and finance was largely due to the influence of Lady Wasteneys, a controversial and perhaps eccentric character. She was born as Julia Marianne Fardell in 1848, daughter of magistrate and Lincolnshire land owner Charles Fardell. In 1875 she married William Wasteneys – a Barrister with an assumed title to the extinct Baronetcy of the Headon Wasteneys although it seems this was never actually claimed or proved by him. The couple settled in Richmond, Surrey and the marriage produced six children four of whom survived.

The marriage though was not an ideal match and in 1885 the couple parted with William moving to New Zealand to practice as a barrister there. Julia did rejoin him there for a while two years later but in 1888 she went to Australia where she was reported to have spent much time with a man named Hutchens. By the 1890’s the marriage had all but broken down with Julia and William each accusing the other of misconduct and after much litigation between them the courts found in favour of Julia. Strangely, there are brief records of William having been knighted during this time but with no explanation as to the reasons for it. In any case it was for him a small glimmer light in an otherwise gloomy time for him for in 1903 he became bankrupt due to the considerable litigation costs and being unable to work as a barrister whilst the court cases were taking place.

It is about that time that Julia is thought to have moved to Southwick. The temple is said to cost £50,000 which in the early 1900’s would today be worth about £4 million so where did Julia get this money from? Julia’s parents died, collectively leaving just £1,490, relatively little for a land proprietor. William Wasteney’s parents left £1,143, again not a large amount even for those days besides which in both families there were other siblings to share the inheritance. The Deed of Separation made by William provided just £240 a year to his wife Julia but only one payment was made. None of this could have been the source of Julia’s wealth and perhaps the answer was that there were rich sponsors – wealthy Indians that she had met on her travels (it is likely she had even met Mahatma Ghandi as she corresponded with him frequently).

According to her butler, Alfred Styles, the Indian influence in Julia’s life was prompted by her journeys abroad – she is even reported as having married an Indian but no proof of this has yet been found. In any case she converted to Buddhism and besides becoming aquainted with Ghandi she was also a close friend of Annie Beasant, a prominent British socialist, womens’ rights activist and supporter of Irish and Indian self rule. The butler also recalled Buddhist high priests visiting them in Southwick.

The Temple stood in the rear garden of Ivy Lodge on the corner of Church Lane with The Green, dwarfing the parent building and vying in height with St. Michael’s church tower that stood close by. Considerably higher than all the buildings surrounding it the temple was clad in red tiles arranged in unusual patterns with three narrow, pointed windows topped by a glass conservatory and massive chimney stack said to resemble a minaret although photos suggest this impression is only gained by viewing the stack end-on.

It wasn’t just the temple that Julia built though as she completely refurbished the rooms in the cottage to her own designs. A map of 1897 shows the cottage with a cluster of outbuildings that Julia utilised or rebuilt to extend the cottage:-

The work on the rooms included very expensive, high quality finishings. A surviving description tells us more:- one room was fitted with oak beams and a widened fireplace; another was made into a Dutch parlour with a red tiled ceiling; there was a French ‘confectionery’ style room with rococco ornaments, flying cupids, wreathes of flowers and ‘sugar plum’ effects. A bathroom was lined with white marble having an alcove topped with a marble cupid trailing flowers and the basins were carved in the shapes of shells from the same marble. Also included was a huge double staircase of which it was said “an army could march up” with Indian statues mounted on the staircase posts and tapestries hung on the walls.

Impressive and expensive though all this must have been it was little compared to what was yet to come as an observer at the time records:- “This tranformation was sobriety itself compared with what she built immediately adjacent to it.”

This was the over-imposing Indian Temple that surely would have detracted completely from the farmhouse effect of the other buildings. Luckily for those interested in Southwick history an anonymous writer took the trouble to look over the Temple in 1932 during the early stages of its demolition.

The interior of the building is described as a series of Indian-style halls, one above the other. The top hall had hand painted panels of ‘intricate semi-geometric designs’ reflecting Indian influence in their colour and form. The middle hall was the most remarkable though, and everything reflecting the Indian influence. The windows were stained coloured glass, a marble dais, balusters and altars at one end above which were supports for a canopy of cloth of gold that had once served as an oriental throne. From each corner of the hall four arches arose that crossed the ceiling, joined near the centre then descended as one column decorated with coloured bands only to end suspended in mid air between the floor and the ceiling.

Whether or not the column was actually made of solid stone (as the writer thought it may be) is unknown, if it was it would have been a remarkable feat of architecture. Peculiarly though, perhaps even bizarre, this impressive effect was almost ruined by the addition to the underside of the suspended column of a plaster cupid holding a tinsel, gas lit chandelier.

The walls were also part-decorated with murals in the Indian style but, completely out of keeping, there were more cupids reclining in beds of roses with highly coloured flowers sculpted in plaster surrounding the panels. Strangely, the description ends there so having described a top and middle floor the writer leaves us guessing as to the existence or otherwise of a possible third, ground floor/hall?

During WW1 the temple was made available for worship to Indian soldiers recouperating at the Royal Pavillion in Brighton. For the next thirty years or so visiting eminent Indians would visit to lecture students of the Buddhist religion and for them to worship.

By now Julia was into her 80’s and eventually had to move to a nursing home in nearby Hove where she died in 1931. Since her conversion to Buddhism she believed she would be reincarnated as an Indian and in her will made arrangements for her cremation from which her ashes were to be placed in a silver urn and scattered on the River Ganges.

Ivy Lodge with the Temple were put on the market the following year but either the property was not saleable as it stood or the next owner did not wish to keep the temple and within a short time the towering edifice, for thirty years a well known Southwick landmark, was completely demolished. Of Julia’s work within the Cottage only the grand staircase still exists and a small section of the marble walls of the bathroom. 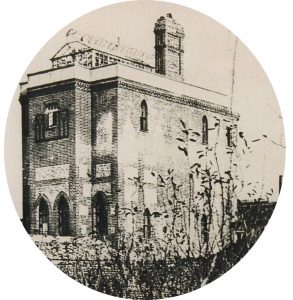 My family moved into Ivy lodge in 1955 and I lived there until my marriage in 1967. My Mother and Father continued living there for several years afterwards. I remember digging up colourful mosaic tiles from the back garden and was told that these must have belonged to the remains of the foundations of the Indian Temple. There was an eau-de-Cologne fountain under the floor boards of the ‘long room’ in Ivy Lodge. This was circular and also mosaic with Eastern influences. The reservoir was still in the cellar when we lived there. The present owners who bought the house from us may or may not know of its existence.
Ivy Lodge was haunted by several notables. An elderly gentleman, a little girl and half a cat. (The tail end). Other apparitions were seen or felt by my family and we became quite used to them. It all made for a colourful childhood. MB July 2019.