To coincide with the re-opening of Shoreham’s Marlipins Museum this May 2022 it is worthwhile mentioning that a visit to the first floor gallery will give a rare opportunity to view in person the original sketch made by Butler in 1786. This accurate snapshot of Shoreham is especially revealing. Roger Bateman’s meticulous examination and research is linked below.

After a very long time closed, the Marlipins Museum re-opens on 5th May 2022.
Entry is now free.

This is also an opportunity to re-watch Roger’s superb montage video about the origins of the museum.

Marlipins Website
The story of the saving of the Marlipins

Shoreham’s church of St Mary De Haura has been a landmark for many centuries. For over 250 years the bells suspended in the tower belfry have been rung from the Ringing Room many feet below. The belfry, the ringing room, the clock movement and the tower roof are only accessible via a very narrow spiral staircase in the North East corner of the tower.

Hamish McKenzie is the current St. Mary’s Bellringer’s Tower Captain – and one of his additional roles for many years is to ascend the narrow steps to raise the flag on national days and state occasions. www.Shorehambysea.com were granted access to accompany Hamish to the roof to raise the flag of St. George to mark St. George’s Day 2022.

END_OF_DOCUMENT_TOKEN_TO_BE_REPLACED

Then & Now: Panoramas from the Tower 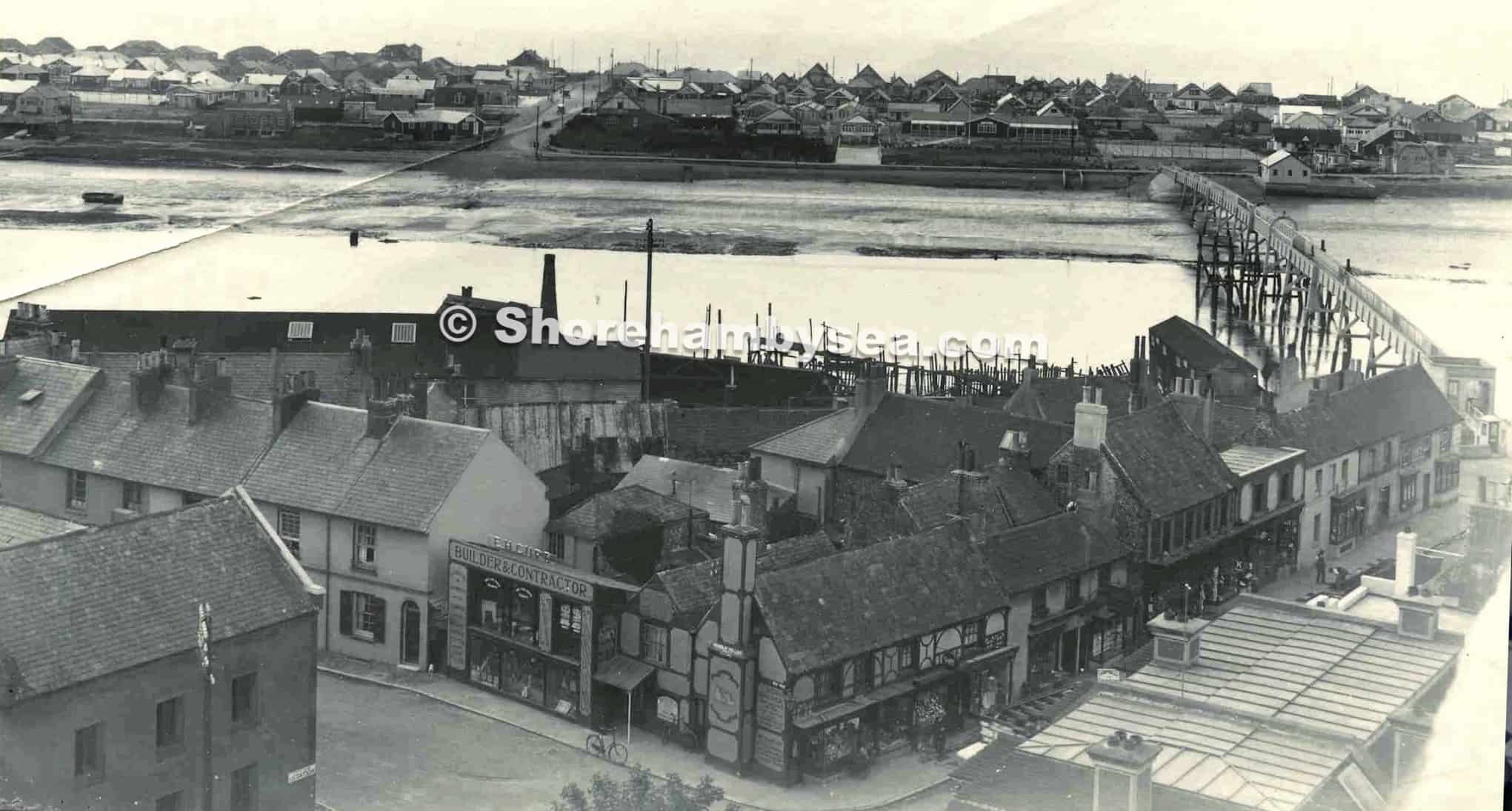 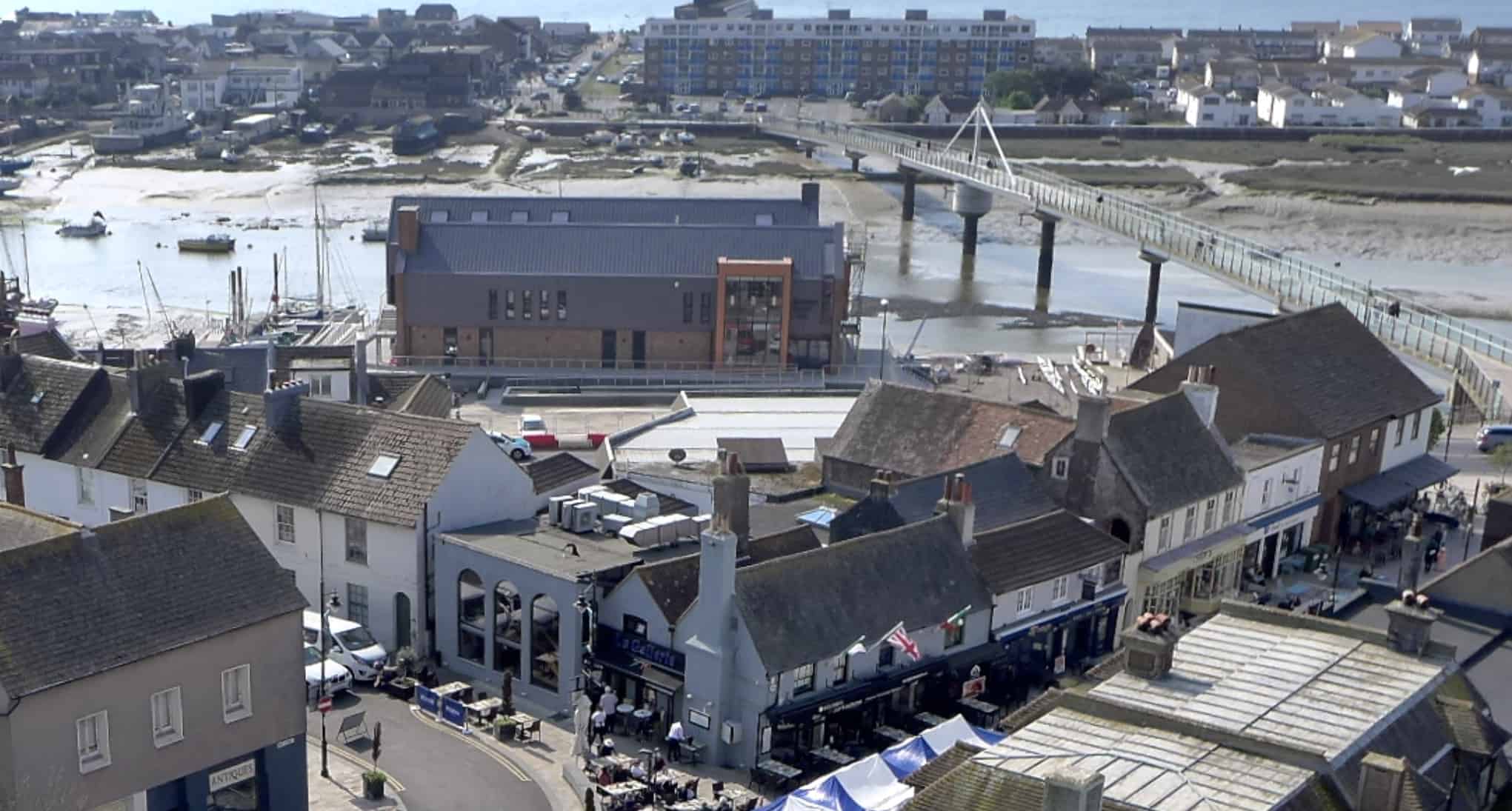 END_OF_DOCUMENT_TOKEN_TO_BE_REPLACED

On Palm Sunday 2022, Mike Riddiford recorded the Bell Ringing before the Service and later recorded a fascinating interview with Ian Vaughan from the St. Mary’s Bell Ringers in the Churchyard. The recording starts with the sound from the inside Ringing Room, where you will hear Ian calling the bells and then later the Tower Captain Hamish leading the bell ringers.

The St. Mary de Haura Bellringers are keen to encourage new ringers to join them. Bell Ringing uses number notation, so it is not necessary to have any musical knowledge, although a sense of rhythm and a good memory can be helpful. Once the basics have been mastered, ringing becomes a group activity with the opportunity of visiting other towers and making new friends.

END_OF_DOCUMENT_TOKEN_TO_BE_REPLACED

Shoreham Beach resident Gill Wright kindly allowed us to record some of her memories of when she lived in “Town” (West Street) and then when her parents moved to the “Posh part” (Old Fort Road). The lack of transport to Southwick from the east end of the Beach at the time, was resolved when a friend introduced her to “The Ferryman”.

Recorded in interview with Mike Riddiford in 2022. The recording is around 14 minutes.

Long time Shoreham resident Bill Gebbett kindly allowed us to record some of his reminiscences from a diverse life in Sussex ranging from his exploits on the farm at Holmbush, driving tractors at 12 years old, becoming a bee expert, amateur film-making, and earning his living as a roofing contractor. Recorded in interview with Mike Riddiford in 2022. The recording is around 47 minutes.

A unique 1:4 scale sailing model of HMS Victory made a rare visit to Shoreham sometime in 1935. As a consequence of a wager between two naval officers a model, about 46ft long was built in Gosport in 1935. It was exactly based on the HMS Victory lying in Portsmouth dry dock No. 2 at the time, as she looked after her restoration 1922-28. This giant model set sail with crew (full size!) to prove that the original ship had indeed been a man-of-war with outstanding sailing qualities.

END_OF_DOCUMENT_TOKEN_TO_BE_REPLACED

Resident in America for many years now, Shoreham born Mike Holland has gathered an interesting collection of paintings of the town and area of his birth that he has kindly had digitally copied for Shorehambysea.com and can now be seen at the end of our paintings gallery.

One is of Brook Harrison’s view of the town from the south side of the river and was painted in 1873. A large sailing ship stands on the stocks at Dyer & Sons’ yard with another moored at Stow & Sons yard, now the Sussex Yacht Club.

The last three large ships to be built built at Shoreham were the Mizpah 1874, Britannia 1877 and Osman Pasha 1878. As far as is known all three were built at the old shipyard not at Dyer’s new ‘patent’ slipway that seems to have only ever been used for ship repairs.

END_OF_DOCUMENT_TOKEN_TO_BE_REPLACED

Friday 13th March 1964: A light aircraft recently departed from Shoreham Airport crashed into a tree and the front garden of a house, 77 Buckingham Road, Shoreham. Both occupants of the Tiger Moth aircraft died either at the scene or en route to nearby Southlands Hospital. The deceased were pilot, Colin Barrett (23) of Hove and passenger Harold Ginn (33) of Brighton.