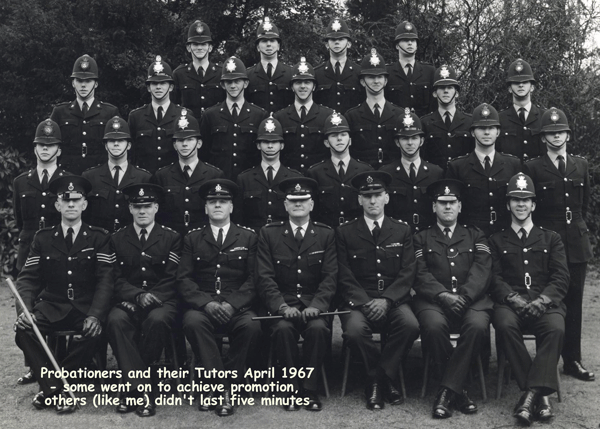 A year or two after getting married and moving to Shoreham I hankered after doing something more exciting with my working life and thought of joining the Police.   I imagined myself drawing admiring glances from the ladies as I strode impressively along the High Street in smart uniform and polished boots  and applied for the West Sussex Police (at that time East and West Sussex were separate forces).

I managed to scrape through the entrance tests and, after practicing for hours doing excruciating neck stretching exercises, was declared tall enough (you had to be at least five feet ten inches tall in those days). Perhaps they felt sorry for me but who cares, I was in even though I suffered a cricked neck for years after.  Training for new coppers was intense, lasted some months and was residential which meant I had to be away from home all week and even some weekends. The Training Centre for the Hampshire, East and West Sussex, Surrey and Kent forces was then at Nutfield, near Redhill.  I missed home life terribly but there was some compensation in the camaraderie with others like me as we were all in the same situation.

There were more people here with really individual characters than in any other job I had been in. There were a fair number of ex. servicemen then and one in our group was Henry Hesketh, a one time sailor in the Royal Navy who had a thick Hampshire accent and an amazingly endless collection of dirty jokes, rude songs and ditties in his memory suitable (or rather, unsuitable) for any occasion.   Dave Gleed was another, a deep-voiced cockney and ex. Guardsman from Surrey who was the parade sergeant’s pride and joy as he already knew how to move and march with precision. I was probably one of his biggest disappointments in the early days as one of the parade ground drills was to salute on the march. I was always concentrating so much on keeping in step that when any command was shouted out I tended to react automatically and, being left handed, could not stop myself from saluting with my left hand instead of my right.

This inevitably prompted the sergeant’s bellowed response ‘Bateman — you prat, you’ve done it again!’  Mind you, I wasn’t the only one. A particularly tall chap with the unusual surname of Pezet just could not stay in step. The parade sergeant did all he could to correct this without success and ended up trying to hide the offender in the centre of our marching ranks but being so tall he still stuck out like a sore thumb bobbing up and down out of sync with the rest of us. Our unintentional clumsiness never failed to cause the rest of the squad to dissolve into helpless laughter and even our instructor could not stop laughing at times. Mind you, by the time of our passing out parade when training was completed we all finally managed to march with precision, react in unison and ‘present accoutrements’ (the full dress parade of numerous complicated movements) to perfection.

I was given the nickname ‘Budgie’ — partly because I was always getting bawled out for talking during parade but also because of my less than standard attire. Everyone wore uniform during training but when I joined West Sussex were short of greatcoats and I was given the old fashioned Victorian era heavy cape instead — the only one of my fellows to have one. I didn’t mind at all the good natured ribbing and calls of ‘Budgie’ but one day made the fatal mistake of standing on the low parade ground wall, tweeting like a bird, flapping my cape like wings and jumping off as if to fly. Thereafter at each parade drill, the buggers always insisted I repeat the process which I had to do to their cheers before I could take my place in the ranks.   My helmet was also old issue – either that or I could never figure out how to adjust the (for me) complicated fittings properly – it was far too big.

Only prevented from completely covering my head by my sticky out ears and prominent nose (the one time in my life that these disfigurements proved useful) it obstructed my forward view so that I was only able to look downwards at a 45 degree angle. It took me sometime to master the wearing of it but eventually I became quite proficient at being able to recognize my fellow probationary officers by their feet.  There was little sport unfortunately, only self defence, swimming for life saving competence and cross country running through the lovely Surrey countryside where we were. Dressing after swimming lessons for life saving was another exercise to get us  to dress quickly (presumably practice for putting uniforms on fast in an emergency call out) and at each strenuous swimming session the time allowed to towel down and dress was sadistically shortened. Exhausted and still wet coppers were then inspected. Few of us managed to dry ourselves properly in time and most had wet clothes on.  Standing in our own personal puddles our shirt tails stuck out over trousers and often through undone flies as well. I was consistently outstanding as one of the few who didn’t even manage to put their trousers on in time.

By far, most of our time was taken up with lectures, practical lessons in dealing with crime and giving evidence in court. At each stage of our training we had to take tests or exams and anyone that failed was only given one more chance otherwise they were dismissed from their force and we saw a few go from our ranks this way. One lad, an overweight mountain of a man not only had trouble with the physical training but also the learning that was crammed into us. Amazingly, despite their own need to study, others in his group spent much time coaching him to get him through.

Very few of us were interested in First Aid but it was also yet another subject to learn on top of the already considerable legal and practical policing subjects. We only had about one half-hour lesson every two weeks but this subject was, like life saving, a ‘must’ to pass. The examination was a bit of a farce to say the least. Volunteer ‘patients’ were provided and we were told to bandage them according to the injury the examiner said they had. Few could remember how the bandage dressings should be applied and broken noses were dressed as broken knees, fractured skulls as if they broken arms, etc., etc., Furthermore the test was time restricted and panicking policemen were desperately turning and twisting the limbs of their unfortunate volunteer ‘patients’ in an effort to get the dressings wound round in time.   Dressings, splints and bandages were flying all over the place and having used what seemed like miles and miles of totally unnecessary bandaging our ‘patients’ ended up completely immobile, trussed up and looking either like rigid ‘x’ shaped men; loosely wrapped Egyptian mummies with limbs sticking out at physically impossible angles or large, wounded sausages with arms and legs tightly wrapped against their bodies and hardly any recognizable human feature visible. When time was called and the panic was over we just stood and stared at our pathetic results. Then someone in the corner of the room started to giggle quietly. That was it – we were soon overcome with uncontrollable laughter.

Our lecturer, a local GP, was also our examiner and must have been paid according to results for despite it all most of us passed. God help the public when we got out on the streets!  Amongst the more unusual lessons we received was one about firearms. Horrific photographs of murdered and maimed victims were shown to us as well as the actual weapons used in the crimes and I well remember the lecturer in question really grabbing our attention by unexpectedly firing a blank from one of the guns and frightening us all to death.

Another was a less than tasteful lecture on illegal sexual acts (it probably would be a totally unnecessary lesson in these more relaxed times). Needless to say the more naive of us were delighted to have the opportunity to learn of what we may be missing out on and keenly examined the sex aids that were passed amongst us. Some of the more inquisitive though quickly ran to the wash room when told not to open the plastic bags the aids were in as they were old evidence and had actually been used!  Having survived training my first posting was to Shoreham where the nick was an old victorian building complete with white tiled Victorian prison cells. Initially I was accompanied by an experienced copper until I became more experienced but my beat was along and around the town centre and beach area. This was terribly boring work, particularly at night as, unless anything happened (and it rarely did), all we could do was check the doors and windows of factories, shops and stores. Contact with the nick was only by phone at various stages of the beat as we had no mobile or radio phones then. There was one lad amongst us who we all knew visited a woman on his beat and not only enjoyed her caresses but also her warm bed — a definite plus on bitter winter nights but probably requiring something of a frustrating lovemaking technique in order to be able to report in at the right intervals! It came as no surprise for us to learn that the poor chap eventually caught pneumonia.

Talking of the cold, I suffered particularly myself with bad circulation during the winter nights.Thermal underwear was not available then that I recall and I soon learned from other more seasoned coppers to do what they did and use a pair of my wife’s old tights to help keep warm (mind you, it always unsettled me slightly just how they managed to get hold of my wife’s tights!) They certainly kept me warm but you would never, ever hear any self respecting policeman admit this practice to anyone.  One incident sticks in my mind which involved me being called out to the King’s Head pub at the western end of the High Street. Apparently, an old woman had found out that her husband was in the pub drinking with another woman. She (the former) had already been ejected from the pub but was banging and kicking the now closed and locked pub door, screaming to get back in. Walking towards this scene my heart sank for there were at least a dozen interested onlookers enjoying the proceedings.   As they saw me I swear the half smiles on their faces widened in anticipation of the fun they would now witness of this very young looking and obviously still wet around the ears copper in trying to deal with an old but maniacal and violent woman. As I reached her she noticed me out of the corner of her eyes and as she turned I couldn’t help but notice her mouth covered with blackheads and dribbling with saliva. She smiled a toothless smile and without further ado, plonked her foul mouth on mine, linked arms with me and meekly allowed herself to be led away.   Another case successfully concluded and it was only a few days later that the herpes broke out on my lips.