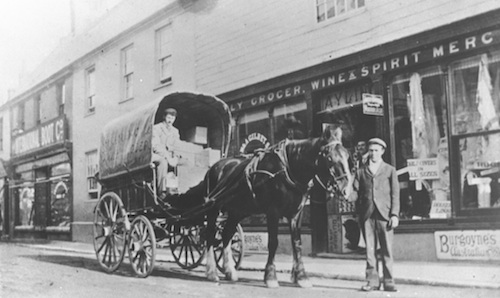 A rare and fascinating relic of Shoreham’s commercial past is this 1908 receipt book provided by Henry Ayling & Sons for their customers. Aylings were family grocers, drapers and furnishers at 54/56 High Street on the western corner with John Street.

The business appears to have been quite up-market as evidenced by the receipt book. This is interspersed with pink blotting paper pages with advertisements on and shows one of their customers were a branch of the wealthy Sassoon family who at the time lived in First Avenue, Hove (Flora Sassoon, the writer and poet Siegfried Sassoon’s grandmother, also lived nearby). Even in the days of horse-drawn delivery carts businesses like Aylings and others in Shoreham traded as far afield as Brighton and Worthing.

The items listed in the book are largely everyday grocery items including fruits such as melons, oranges, lemons, sultanas, currants, as well as walnuts in bottles, herbs, lentils, milk, sugar and flavourings etc., all used in the preparation of food and without much doubt ordered and delivered to the cook and servants in the Sassoon household without involving the family itself. Hardware items are also included:- a broom at 1 shilling and three pence, brushes, shovels and coppers.

Popular brand names of the time appear such as Bluebell (metal polish), Bengers (supplement for children and invalids) but what was ‘Wem’ and what were ‘Wish Papers’? Products rarely seen now like pea flour (used in baking) and sperms (a white, waxy substance produced by sperm whales and used in candles). Bacon was very popular appearing in most deliveries in quantities of over a pound in weight and a bottle of brandy is shown at 5s/6d, toilet paper (no old newspapers for them) and a touching inclusion of ‘7 puppy biscuits.’

Paid orders in the book were receipted with a rubber stamp impression and signed by Gordon Ayling, albeit in pencil. Amounts over £2 were receipted over a one penny postage stamp.

You can find more information about the Aylings Family here.