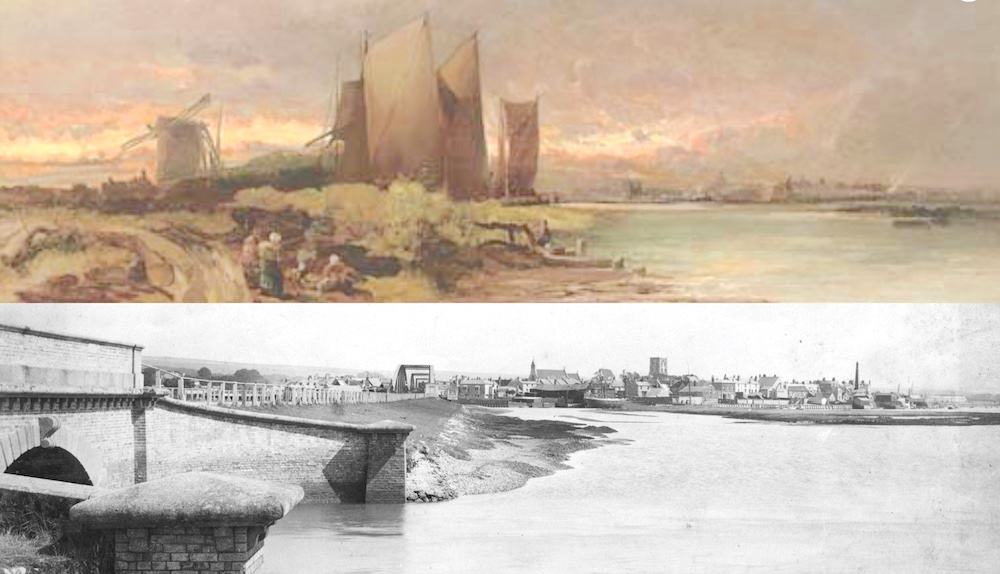 I’m sure we discussed this painting some years ago on the old web site without coming to any real conclusion as to its exact location. Assuming the content is not artistic licence then the view almost fits the history we have of one part of the Shoreham river front area. The windmill could be the one that stood on Mill Green at Ropetackle and behind it rising ground in the distance that may be Mill Hill; the town to the right and the timber work in the foreground is perhaps where the flood arch is now.
There are two question marks of this though.
The Norfolk Suspension Bridge had been well and truly built by the time the artist painted it and (if it is this area) should have featured as the centre piece of the painting so why has he masked the bridge with the boats’ sails?
The Ropetackle mill (we know it was a post mill and the painting confirms this) and the land it was on was sold in 1790 to Daniel Roberts who built a large granary on it. This had burned down by the 1820’s but could it be that the windmill was at a distance from the granary and still standing at the time of the painting – it certainly looks dilapidated with only two sails?
(Fisherfolk on a Tidal Estuary, Shoreham by James Webb 1825 – 1895)