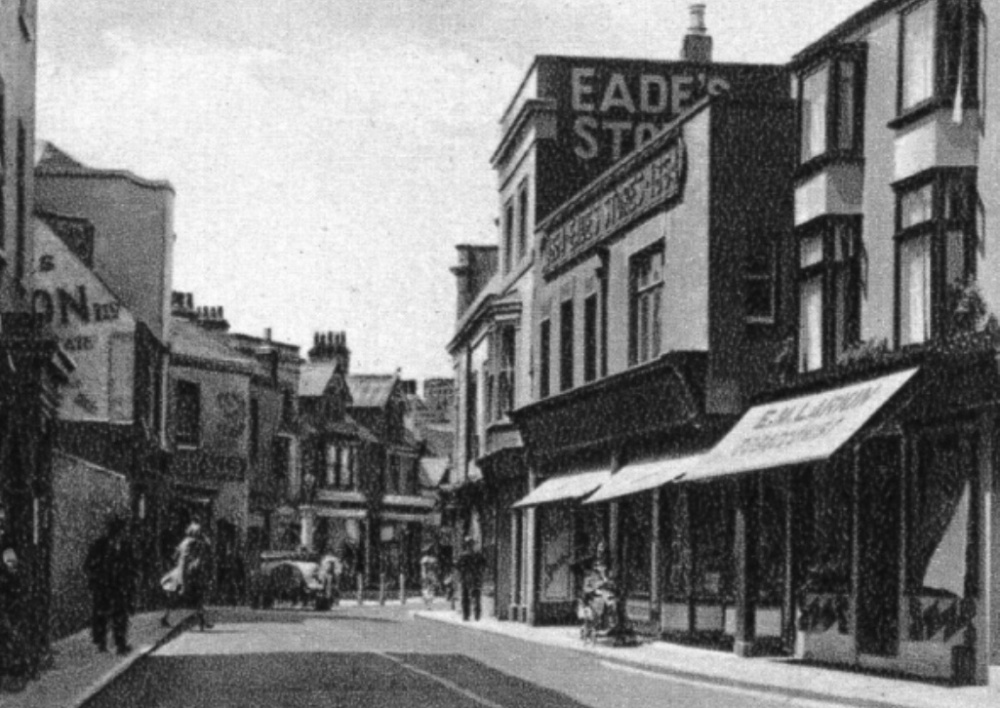 A Walk to the Bridge and Back

A compilation of old postcards and photos from the 1890’s to 1930’s arranged in order to provide a visual representation of a walk through the High Street as it once was, across the old Norfolk Suspension Bridge and back.

……. now looking down to the river with the Dolphin Hotel on the right and the East Street Arms on the left…..

The wharf buildings beyond the hotel had been used in the past by fishermen and boat builders alike but by the early 1900’s the nearest part was the workshop of John Brooker, sign-writer and painter.

Moving further down alongside the buildings the lower half was used by G.F.Woolver, carpenter and joiner.

…… and the wharf buildings were re-roofed to become the Dolphin Garage.

…. then sharp left around the Dolphin Hotel into the High Street proper towards Eade’s stores in the middle distance……

Looking westwards again from Eade’s High Street Stores with Ernest Knight standing in the doorway of his shop next door – the poor chap was killed in action at Arras during WW1 as was his brother also from Shoreham. Henry Paine’s ironmongery is on the left – he was the father of Hubert Scott-Paine who helped found Supermarine Ltd and whose designs helped us win the air speed racing Schneider Trophy outright. Carrying on through the narrow gap here between both sides of the High Street where the rather grandly titled shop ‘Shoreham Fruit & Vegetable Market’ can be seen on the centre right at the junction with Church Street.

Here the street opens out to reveal, on the left, one of the ten old columns that once supported the old Market House. Another surviving column can be seen later outside the town hall – both removed from their original positions and now serving as lamp posts.

…until this point then look left –

……. until it burned down shortly after.

…. and was replaced by shops run by Glasspool Chemists and Luckings Outfitters

Next door the Crown & Anchor is one of Shoreham’s best known pubs since at least the 18th century (albeit under a different name) and was once a stagecoach stop which the first of these photos re-enacts as well as being a rendezvous point for such gatherings as the local hunt.

……to Shoreham’s oldest secular building, later to become Marlipins Museum, as it comes into view during the snowstorm of January 1881 then passes as we walk by.

Crossing back to the south side of the street to the Town Hall and the Royal George inn….

Shoreham’s fire station was just around the corner on the left in the side of the Town Hall. A short detour down there to the river side provides a particularly good view of the suspension bridge beyond.

where William Wimble is demonstrating his new extending ladder to Shoreham firemen.

Back up to the High Street and continuing westwards with the King’s Head in the distance passing Ayling’s delivery cart and stores on the corner of John Street…..

….. on towards West Street to see a front garden over the pavement! Frederick Wood stands proudly by the front gate of his house – one of the few remaining residential properties then still existing in the High Street….

open area at the western end of the High Street to the West End Stores. Look to the left to take in the rest of the buildings here…………

…….across to the Lancing side and down the bank……….

….. for the view down river then back up to the bridge.

Back past the kiosks selling teas and lemonade, through the arches to the town side and a last view of the river by Suter’s Yard.

From the bridge northwards the shops ahead included Harker’s ironmongers and Robert Page omnibus proprietor.

Turning back eastwards, on the right is what was left of the ancient Fountain Inn which by then had been incorporated into the Bridge Hotel. In the old stable entrance there, Reg Eley first started his business selling Singer motorcycles.

Continuing back along the High Street with (left) the West Street entrance behind the ’Teas’ sign and the gable end of Piper’s drapery shop at the Ship Street junction. The photo on the right is the same view further up some years later.

The narrow part of the High Street opened out from the Town Hall and John Street to Church Street and was once the town’s old market place. Outside the Town Hall is the other surviving Market House column mentioned earlier.

Passing John Street and approaching Marlipins during the town’s celebrations for the coronation of King George V in 1911. On past the Crown & Anchor, before it had the front gables added, towards the Albion Steam Brewery at the end of the street.

Approaching now the old Dolphin Buildings and Brewery now partially demolished and the Star Inn at the lower end of Church Street.

Just beyond the Star Inn the road narrows at the Dolphin Buildings and we are back to Henry Paine’s ironmongery as it forms the backdrop for a cadets’ march past during WW1.

Immediately opposite, next to the Star, is William Winton in his delivery cart surrounded by his paper boys (and man) in front of his shop. Another photo shows the shop bedecked in full display – the close up of the pictures in their frames could almost be the window of any antique shop today. 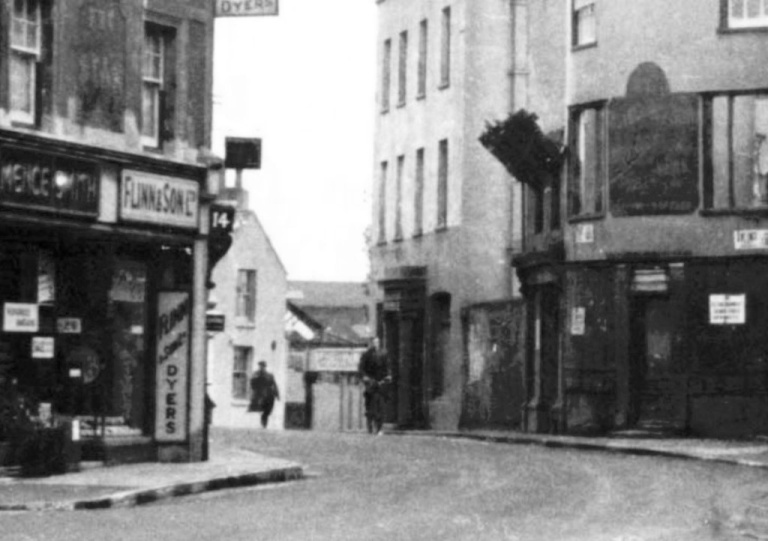 Near the end of the walk now, passing through the narrow gap between the Dolphin Buildings and the north side of the street with the East Street Arms just showing beyond – a wooden safety screen (to catch falling masonry) fixed to one of the first storey windows tells us this is 1938 when the Buildings were being demolished

Finally, turning right, around the Dolphin Hotel to return to Dolphin Hard and the ferry crossing at the end of the walk before the footbridge was built.

The images in this article are taken exclusively from the photos and postcards in the Historical Photo Galleries of Shoreham’s community web site:- www.Shorehambysea.com.

This article is adapted from one of the same title on the Shorehambysea.uk web site where a selection of these images have also been placed on the ‘Shoreham Historical Photos’ gallery. There the ‘slide show’ facility can be used for a more realistic, virtual impression of the walk.