The Shoreham Cine and Miniature Camera Club was started in the late 1950’s by local retailer Paul Plumb. He gathered a group of friends & advertised in the local press to form the cine club. Paul had a shop in Shoreham & was very well known for his enthusiasm about life in general. The response he got was quite amazing, in the region of 60 people were interested in becoming members.

END_OF_DOCUMENT_TOKEN_TO_BE_REPLACED

Published in 1921 this is a copy of the definitive history of Shoreham-by-Sea written by local historian Henry Cheal, Hon. Curator and Librarian to the Sussex Archaeological Society

The Story of Shoreham by Cheal pdf

There is a curiosity hidden deep in the plans and maps of Shoreham Airport… the previous existence of three WWII Pickett-Hamilton Defensive Forts. Are they still hidden under the grass and tarmac? Are they lost?

END_OF_DOCUMENT_TOKEN_TO_BE_REPLACED

As a child I read that Wilmot Road had been named after Lord Wilmot a supporter of King Charles, and his son Prince Charles, who escaped to France, this could not have been done without the help from the Noble Lord.

I also found out that Lennox Road, was named after an earlier Member of Parliament, who had represented Shorcham. I had never before given much thought to the origin of Street names. Therefore I decided to make notes and to find out more about other streets in this ancient town.  I was not disappointed.

END_OF_DOCUMENT_TOKEN_TO_BE_REPLACED

This image is quite a find – maybe a never seen photo detail of the long lost Election Stone, shown on maps and illustrations as being set into the pavement but it disappeared when the road was realigned.

Two years ago an enquiry came into the Shoreham Forum for permission to use photographs of Stow and Sons shipbuilding yard. The enquirer was rebuilding Tally Ho, originally built at Shoreham in 1910.

It you have an hour or two then there is a delightful set of videos documenting the progress on the build. You can find out more about the history of Stow and Sons here: https://www.shorehambysea.com/stow-suter-yachts/

END_OF_DOCUMENT_TOKEN_TO_BE_REPLACED 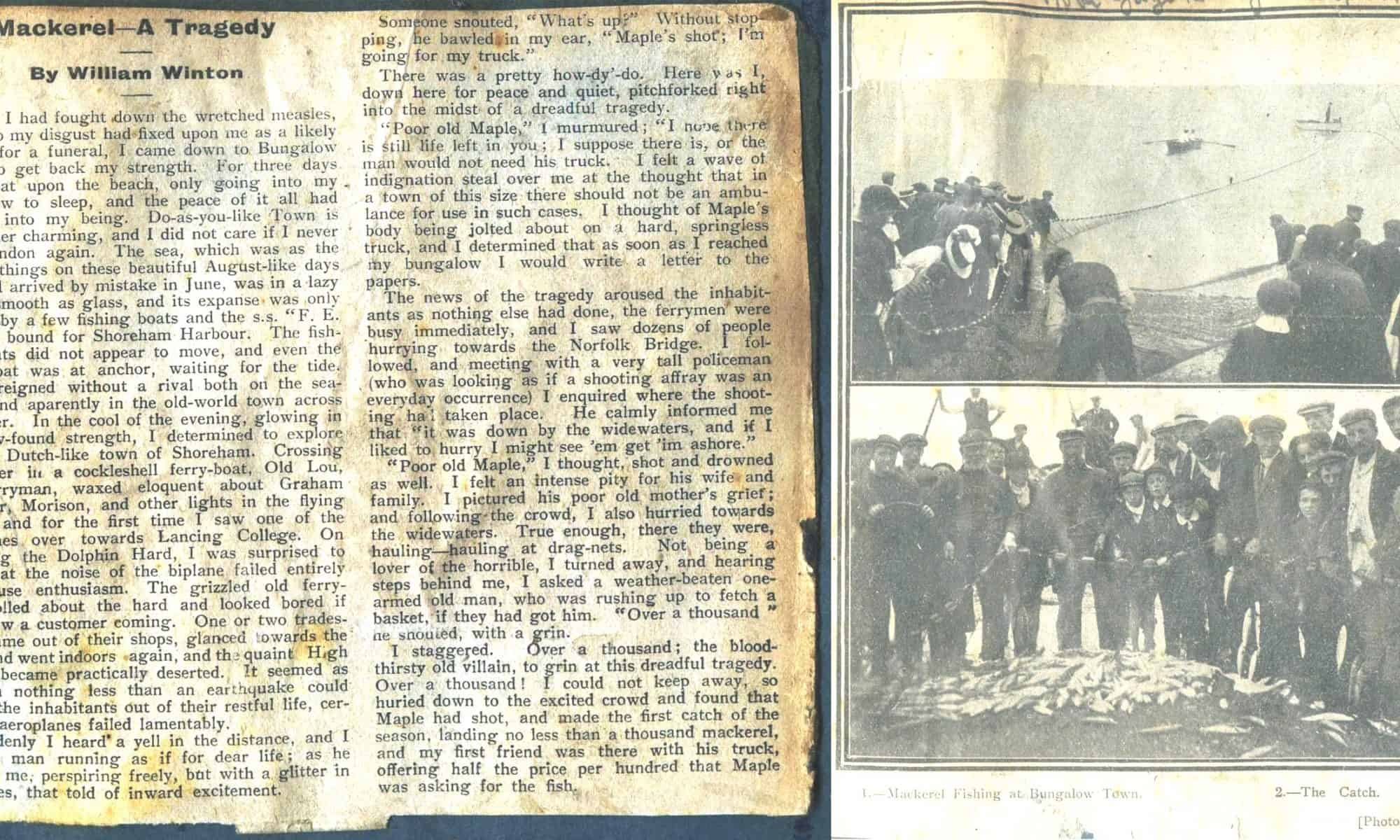 These wonderful shoreham fishing photos come courtesy of Mary Gibbs. A newspaper cutting (written in a comical vein) from our own collection suggests that the fishermen were from the Maple family who appear elsewhere in articles on our website as oyster merchants at the western end of the High Street and sportsmen, mainly racing oarsmen and footballers.

One of the photos shows one fisherman wearing a jersey with the name ‘Imatra’ on it. This was one of the yachts built at Shoreham by Stow & Sons, launched in 1899 and over 100 years later is still sailing in water around New Zealand (see https://www.shorehambysea.com/stow-suter-yachts/ )  Like many other Shoreham fishermen this Maple man probably ‘double-jobbed’ as part of the crew for local yachts as and when required.

This from Roy Wood of photos from William Wood’s funeral in 1934. William lived at 5 Middle Road (later renumbered 36), Shoreham. He had joined the Royal West Kent regiment in 1892 and was finally discharged in 1917. The Army honours their own – the funeral procession was provided by the Sussex Regt. He is buried in St Julian’s graveyard.

Originally stretching all the way on both sides of the road from the suspension bridge to the flood arch, the old railings on the north side have recently been replaced by wooden ones.  Whether or not they were erected at the same time as the bridge itself (1833) is uncertain although it can be seen in many late 19th and early 20th century photos. This used wooden posts with the distinctive square iron rails held in place by a metal strap. Sometime since the wooden posts were replaced with cement ones but still using the square iron railings. Some of the south side railings still survive, for now, and although they may be of little architectural importance it is sad to see yet another part of the town’s history quietly disappearing almost unnoticed. 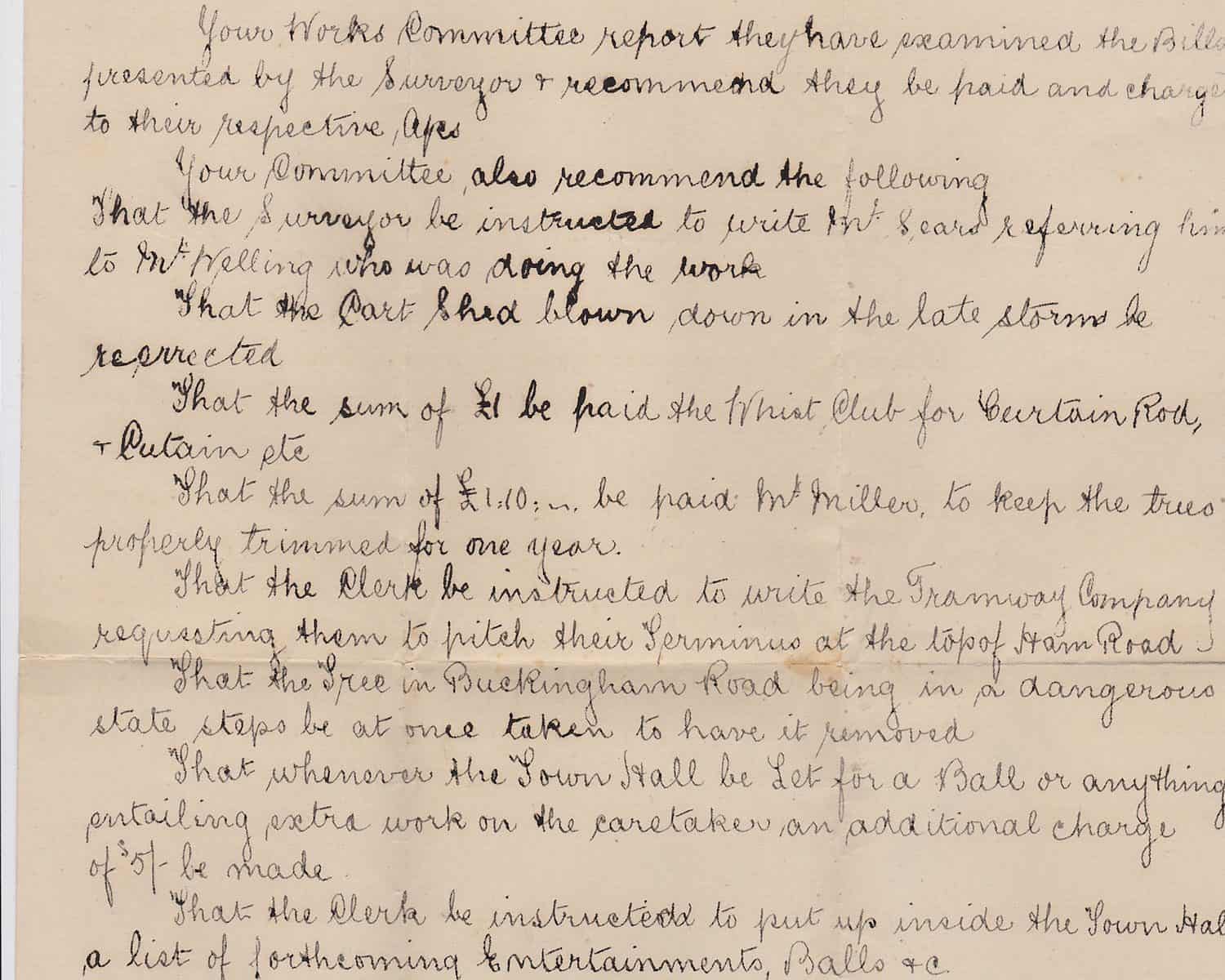 Little bits of history in snippets here from E. R. Harmsworth’s letter to the New Shoreham Local Board in 1891 most significant of which is the instruction that the new tramway terminus must be sited at the top (western end) of Ham Road.